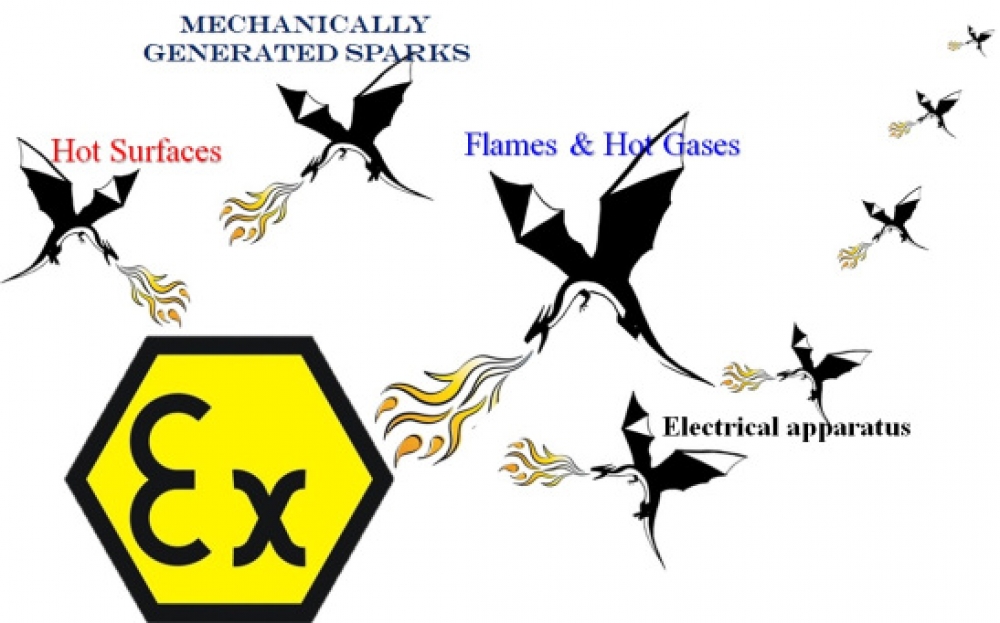 The officially recognized IGNITION SOURCES or ‘FIRE STARTERS ‘ are given in European Standard EN  1127-1 (2011).

Important parameters to be considered are : This is one of the most effective source of ignition.

Presence of even a small flame (say a burning candle ) clearly indicates that a combustion reaction is in process at temperatures of around 900 Degrees Centigrade  with production of hot gases .

“A FLAME AND A HAZARDOUS AREA ARE AT-ONCE EXPLODED “ .

Remember the old saying from the ‘The Fables of Experts’

As a result of friction, impact or abrasion processes such as grinding, particles can become
separated from solid materials and become hot owing to the energy used in the separation process. If these particles consist of oxidize-able substances, for example iron or steel, they can undergo an oxidation process, thus reaching even higher temperatures. These particles (sparks) can ignite combustible gases and vapours and certain dust/air-mixtures (especially metal dust/air mixtures).
In deposited dust, smouldering can be caused by the sparks and this can be a source of ignition for an explosive atmosphere.  (EN 1127- 1: )

There is no doubt about this fact that the most notorious, the most dangerous & the most effective FIRE STARTER is an ELECTRICAL APPARATUS.

let us consider one of the most simplest of all the Electrical Apparatus.

EVERY “ON”-“OFF” operation is an IGNITION SOURCE Electrical Inertia is due to the resultant Impedance of the circuit

Stray Currents in an electrical network are  like STRAY Animals in your neighborhood……….. lost, unwanted and a nuisance .  Useful , perhaps……… desired, maybe , but not in this form.

Stray currents can Ignite an explosive area through the following mechanism:

All conductive parts located in the radiation field function as receiving aerials /antennas. Ionization is the process by which an atom or a molecule acquires a negative or positive charge by gaining or losing electrons to form ions, often in conjunction with other chemical changes

X-rays and gamma-rays, and sometimes they have the same energy.

Ultrasound is sound waves with frequencies higher than the upper audible limit of human hearing. (The range of human hearing is generally considered to be 20 Hz to 20 kHz)

The most common & familiar uses are as follows: Ultrasonic sound waves , generated by  electroacoustic transducers , can transfer the inherent energy as heat to liquid or solid substances , which in extreme cases can overheat and ignite .

A good example of adiabatic compression is the gasoline engine ‘s compression stroke during operation.

13. Exothermic reactions , including self-ignition of the powders